Posted at 12:30h in Pain Management by aenriquez 0 Comments
0 Likes

Radiofrequency ablation (RFA) is a procedure used to reduce pain caused by arthritis in various joints of the body, including the spine, hip, and knee.

Using X-ray guidance, an RFA probe is inserted into the affected area, which produces an electrical current that sends radio waves into the nerve tissue, heating them up and blocking pain signals.

RFA is used to treat conditions that include:

What to expect after RFA

RFA is not a permanent cure for back or neck pain. There is a large variation in the outcome of this procedure, ranging from near-complete pain resolution to no benefit at all. The pain-free duration after an RFA varies from person to person depends on the site and the extent of disease. Typically, patients experience pain relief for six months to a year after an RFA treatment. However, RFA treatment may need to be repeated if pain returns. 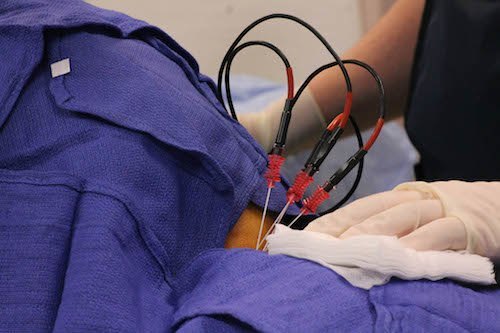 These include numbness, local/regional discomfort. These are expected to subside in a few days with the help of symptomatic relief measures like ice/heat packs. However, if there is severe pain at the injection site, or swelling and redness, or increased limb weakness, it requires immediate medical attention. There is sometimes concern that there will no injury to joints or back due to lack of sensory innervation post-RFA; evidence shows that patients have not been found to be at any increased risk of injury post-RFA.

In a few patients, there may arise a condition called the post ablation syndrome, which is characterized by flu-like symptoms and lasts for about five days. A localized abscess at the site of procedure may occur between three to four weeks. This will likely require drainage and the prescription of antibiotics to cure it.

Generally, one RFA procedure is enough to get pain relief. However, nerves can regenerate and the pain may return. In that case, it may be necessary to repeat the RFA. The earliest it can be repeated is 8 months after the prior procedure. If the response to the first RFA was >80% pain reduction, then there is no need to have a second injection immediately. But if >20% pain persists, a second RFA may be considered.