Radiofrequency Ablation Therapy as a Treatment for Lateral Elbow Pain

Posted at 08:22h in Pain Management by aenriquez 0 Comments
0 Likes

Elbow pain can be extremely inconvenient because we use our arms for most tasks during the day, greatly limiting mobility in active adults. Although lateral elbow pain is generally manageable and clears up quickly, a small number of people have symptoms that persist for a long time. When traditional treatment methods fail, surgery is the next step. Radiofrequency ablation is a minimally invasive procedure that improves chronic pain when applied to nervous tissues without causing any damage to the area. This procedure is safe and has less risk of complications compared to the surgical approach. It is able to stop the pain signals being sent from your elbow to your brain, alleviating chronic pain and allowing you better use of your elbow.

What is Radiofrequency Ablation (RFA)?

Radiofrequency ablation, also known as rhizotomy, is a non-surgical procedure where radiofrequency waves are delivered to certain nerves, with the intention of interrupting pain signals to the brain. An electrical current is produced from this radio wave, heating up a small area of nerve tissue, decreasing the number of pain signals sent from the nerves. Radiofrequency ablation is generally used to target pain from the facet joints, which can cause chronic pain in the neck or lower back, and the sacroiliac joints. The degree of pain relief after treatments varies depending on the cause and location of the pain. Pain relief from radiofrequency ablation can last from anywhere between six to twelve months, and in some cases, relief can last for years. More than 70% of patients treated with RFA experience relief from their pain. RFA has proven to be a safe and effective way to treat some forms of pain. It also is generally well-tolerated, with very few associated complications. There is a slight risk of infection and bleeding at the insertion site. Your doctor can advise you about your particular risk. 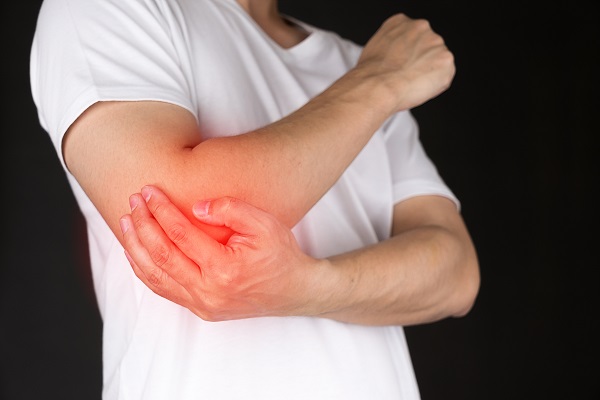 What is Lateral Elbow Pain?

Lateral elbow pain can be caused by many different conditions, including Tennis elbow, arthritis, bursitis, and dislocated joints. Elbow stiffness is associated with arthritis or trauma. Stiffness restricting flexing of the arm is more disabling than the restriction of extension. Neurological symptoms like numbness and tingling should be checked for nerve damage. Ulnar nerve radiculopathy is common in medial epicondylitis, osteoarthritis, and inflammatory arthritis. Pain from neck or shoulder can also cause elbow pain. The spine should also be examined in cases of rheumatoid arthritis.

How Can Radiofrequency Ablation Therapy Help With My Lateral Elbow Pain?

Radiofrequency ablation is able to stop pain signals being sent from damaged nerves. If a damaged nerve causes your lateral elbow pain from an injury or surgery, radiofrequency ablation may be able to stop your chronic pain. Overuse, dislocation, arthritis, and surgery can cause damage to the surrounding elbow nerves and the radial nerve. Radio waves applied to the radial nerve have been shown to reduce lateral elbow pain in patients with lateral epicondylitis.